Tokyo summer. It’s been a bit of up and down since the last entry. Balance is so much easier said than done. Tonight I chose to curb the partying by staying in, watching the Olympics, and catching up with old friends.

My camera also broke this past weekend. This was the last photo: 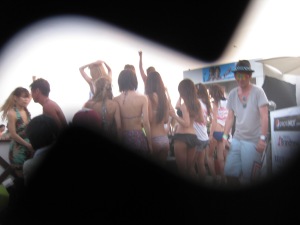 That being said, I do have a new DJ name: TIMESLUT

As seen earlier, the best days have definitely been with the sun and sand. The vibe there is so much better. No stressin’… For a more well rounded image (besides my one picture),  you can check this video: I’m at 2:42 with my partner in crime. http://vimeo.com/46770937

Image-wise, I got a bunch of fake Ray Bans from my kick-ass sister. In addition to this, I learned a new line to harass strangers with : “Are those fake?” (nisemono?)

Meanwhile, these two tracks have been dominating my summer.

And those shiny city lights: http://soundcloud.com/ramrecords/calyx-teebee-elevate-this

“Embrace the unpredictable and unexpected. It is the path to the infinitely creative in you.”